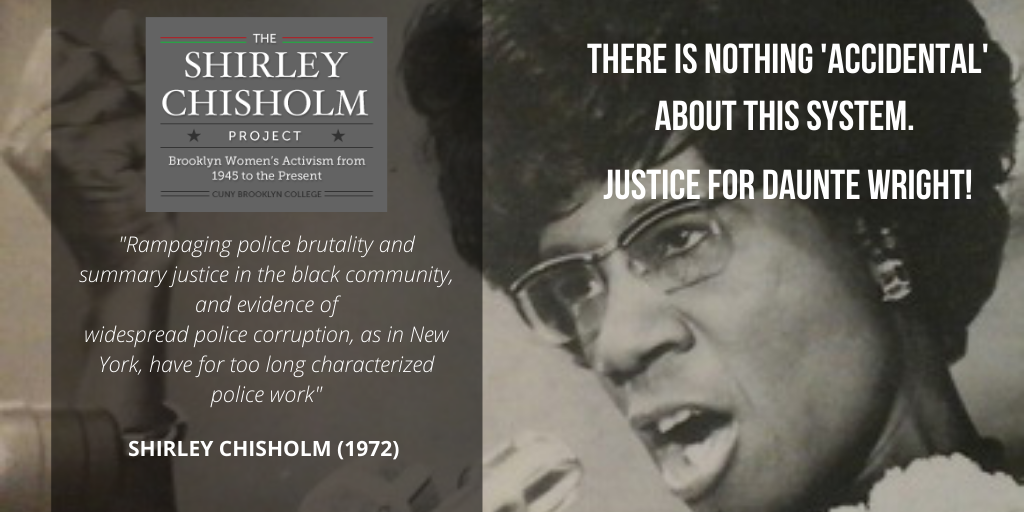 Yet another Black life, family and community is devastated by what Shirley Chisholm years ago described as “rampaging police brutality in the Black community” This time, a young Black man by the name of Daunte Wright was killed needlessly by police in Brooklyn Center, Minneapolis.

In this case, the claims that his death was accidental runs counter to a history which tells us that anti-Blackness is a basic principle of American law enforcement. We know, therefore, that it is never an accident when a Black person is killed by police in America.

Nearly half a century ago, Congresswoman Shirley Chisholm made criminal justice reform a pillar of her presidential campaign. She observed that government repression and state violence against people of color:

“…has provoked widespread shock and dismay among millions of Americans that their government has become an enemy to its own people.”

That same realization fuels the uprisings that flaring up in Daunte Wright’s name—just as it did after Breonna Taylor, George Floyd, Ahmaud Arbery, Eleanor Bumpers and countless other lives who were intentionally taken by this system. In their names, and in the spirit of Congresswoman Chisholm, we renew our call for the end of the police state in America so that it can be replaced by order that prioritizes human life and social justice.

Today we also highlight the collective trauma of Black mothers, daughters and a host of Black women who have been bystanders to these acts of violence. We acknowledge the violence perpetrated against those who have had to endure the first-hand trauma of seeing Black life diminished in front of their eyes. We hear their cries and feel their pain. We stand with Daunte Wright’s community and the many other Black communities who are forced to relive their own memories of state brutality.