It has been fifty days since 16-year old Ma’Khia Bryant was shot four times by Columbus police officer Nicholas Reardon mere seconds after arriving at her foster home. We are still awaiting for Ma’Khia Bryant to receive justice for a senseless death.  Justice is not only confined to the prosecution of Officer Reardon. Justice must also involve addressing the foster care system that failed to protect her. According to press reports, that foster care home has been the scene for over twelve 911 calls in past years. Such evidence possibly suggests a disturbing pattern. The Chisholm Project supports the efforts of Rep. Joyce Beatty of Ohio, Sen. Sherrod Brown of Ohio and Sen. Ron Wyden of Oregon call for an inquiry by the US Department of Health and Human Services’ Administration for Children and Families and a private independent federal investigation.

There must be efforts to address the disregard for human life by the Columbus Police Department. At a press conference the interim Chief of Police Michael Woods explained that Reardon was not required to announce himself, give a warning, or de-escalate the situation because Ma’Khia was in possession of a weapon. The fact  that no efforts to understand the conflict or the use of de- escalation tactics draws a number of concerns around policing. 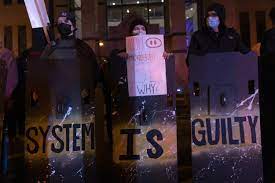 Despite the protests that erupted in Columbus in the days following the public outcry has dwindled. But For those outside the city, a number of commentators, analysts and public figures joined the Columbus Police Department’s claim that the 16-year old Black girl was responsible for the shots that killed her and that the white male officer who pulled the trigger was not. Figures like LeBron James, a native of Ohio, who called for accountability were swiftly silenced. By the time of Ma’Khia’s funeral on April 30th, the calls for justice in her name had almost completely subsided.  Unlike other innocent Black men killed at the hands of police there was little or no coverage of  her funeral proceedings.

After the global protests in the aftermath of George Floyd’s killing, the often callous response we’ve seen to the murder of Ma’Khia Bryant is damning. But we have been here before. If it had not been for a very small group of activists who insisted otherwise, Breonna Taylor’s story, too, would have been drowned out. History has taught us that no one will fight for Black women and girls unless we take action to change the system and pressure social justice movements to center the lives of Black women and girls. Therefore, we propose the following action steps in Ma’Khia Bryant’s name: