Posted Feb 4, 2014 by BC News on the Brooklyn College website.Click here to see the original article.

On January 31, the U.S. Postal Service honored Shirley Chisholm '46—the first black woman elected to Congress, and the first African-American to run for president—by issuing a limited-edition 37th Black Heritage Forever stamp. Chisholm joins several of the nation's leading African-American pioneers featured in the Black Heritage stamp series begun in 1978 with the issuance of the Harriet Tubman stamp. A ceremony marking the occasion took place at Brooklyn Borough Hall.

“This was an extraordinarily wonderful and important event to have Shirley Chisholm not only honored by the United States Post Office, but by so many important people including political activists from Brooklyn,” said Barbara Winslow, a professor in the School of Education and the Women's and Gender Studies Program at Brooklyn College, and director of the college's Shirley Chisholm Center for Research on Women. Winslow is also the author of the biography, Shirley Chisholm: Catalyst for Change (Lives of American Women, 2013).

As a student at Brooklyn College, Chisholm was mentored by a political science professor who saw her potential while watching her debate, and encouraged her to go into public service. She saw this as something difficult, if not impossible because she was black, and a woman. “Brooklyn College changed my life,” Chisholm wrote in her 1970 autobiography Unbought and Unbossed. “In college, I began to bump up against the world.”

After a career as a teacher, she would go on to be elected to Congress in 1968 and serve seven terms for New York's 12th Congressional District. Four years later, she would become the first major-party black candidate for President of the United States. Throughout her tenure in Congress she was a steadfast supporter of legislation that improved healthcare, public education, and the lives of the working poor, among other causes. 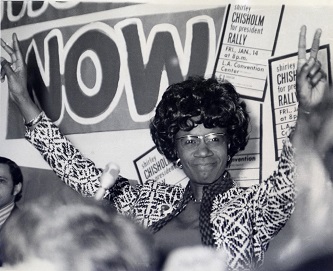 Founded by Winslow in 2006, the Shirley Chisholm Center for Research on Women strives to develop original scholarship in gender studies and to encourage the growth of feminist inquiry and practice.

“We hold events once or twice a year to celebrate Mrs. Chisholm's life and legacy. We've brought people to the center who knew and worked with her, like Gloria Steinem, Donna Brazile, and Anita Hill,” says Winslow. “We've brought activists from the civil rights movement, from the women's reproductive rights movement, and Karen Lewis, president of the Chicago teacher's union, to commemorate Mrs. Chisholm as a teacher activist.”

Winslow also created the Shirley Chisholm Project on Brooklyn Women's Activism, a repository of women's political activity in Brooklyn from 1945 onward. “This year, the Chisholm Project is dedicated to the struggle for voting rights, and the commemoration of the 50th anniversary of Mississippi Freedom Summer, as well as the current efforts to combat voter suppression, something of which I believe Mrs. Chisholm would be most proud.”