Chisholm’s role as a student and teacher of Black history was one of her most powerful tools as a history-maker. She was a learner and an educator long before she shook up the political establishment as a Congresswoman and presidential candidate. This is what defined her unique perspective as a policymaker and what continues to define her powerful role in Black History. Her gift to history was not just in becoming a leader herself, but educating and inspiring the leadership to come.

As a shaper of social and political events, Chisholm first had to be a student of them. This is why, in a 1984 speech entitled “The Viability of Black Women in Politics”, Chisholm (then a professor of politics and sociology) described herself as “an avid student of history.” She was reflecting upon the Civil Rights Movement, the Black Freedom tradition, and how Black women like Fannie Lou Hamer, Septima Clark, JoAnne Gibson Robinson and Ella Baker had always been catalysts for change, even when they were not recognized in formal annals of Black history. Her keen understanding of the way Black female leaders were written out of history was decisive in her decision to make history herself—and encourage other women like her to do the same. She declared that “Black women must seek political power” (and make history) “in their own right.” 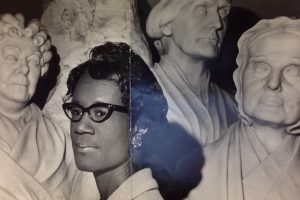 In her public addresses and political philosophy, Chisholm was constantly in dialogue with her forebears and contemporaries in the global Black Freedom struggle. As a new Congresswoman, for instance, she draws upon the work of Franz Fanon’s The Wretched of the Earth in a speech entitled “The Black as a Colonized Man.”

“He pointed out that for the ‘native’ in the colonial world the dividing line, the frontier, is clearly delineated by the barracks and the police station; the intermediary between the powerful and the powerless are the soldiers and the police…When we talk about the Black American as a “colonized man” it is important to remember that he has always lived in a capitalistic democracy that has not hesitated to use violence as well.”

This tension between the threat of violence and the dream of peaceful revolution was something she grappled with throughout her career as a thinker and politician. In Unbought and Unbossed, for example, she established her own political philosophy as uniting King’s radical nonviolence with fierce urgency of Malcolm X’s mantra “by any means necessary.” Of King, she wrote,

The strength of…King was a strength of gentleness, understanding, and compassion, with no element of violence in it. It was, in short, a female strength, and that is the kind that often marks the highest type of man. (296)

In that same book, she found herself in agreement with Malcolm X’s critique of euro-centric education. Despite the necessity of Black people, in earlier stages of their history, to “succumb to “mind-deadening” education, “[t]his chapter in the history of black America is another proof of the justice of black demands for control of their own institutions, particularly the schools (258). She also argued,

“[P]eople had better start to understand that if this country’s basic racism is not quickly and completely abolished—or at least controlled,—-there will be real, full-scale revolution in the streets. I do not want to see that day come. But I think of what Malcolm once said about freedom: ‘You get your freedom by letting your enemy know that you’ll do anything to get your freedom. Then you’ll get it. It’s the only way you’ll get it'” (262)

Chisholm understood the tension between nonviolent humanism and revolutionary necessity at the heart of the historic Black struggle. This is how she made sense of the tension:

“From the beginning I felt there were only two ways to create change for black people in this country—-either politically or by open armed revolution. Malcolm defined it succinctly—the ballot or the bullet. Since i believe that human life is uniquely valuable and important, for me the choice had to be the creative use of the ballot. I still believe I was right. I hope America never succeeds in changing my mind” (272).

But later in her career, Chisholm openly worried about the trajectory of Black history and political action in America. In her 1980 speech “Black Leadership Must Be Earned”, she critiqued contemporary Black leaders for not answering to the needs of Black people at a time when the need for new, revolutionary leadership was dire:

The question must be answered: What made Dr. King, Malcolm X and Adam Clayton Powell great leaders? What were the personal strengths of Frederick Douglass, WEB DuBois, and Marcus Garvey? Where are there successors? Why do we at the present have the mouths, but not the minds, of black aspirations? How can each of us help recreate a physical and spiritual environment where true leaders can again flourish?

Chisholm always brought her understanding as a teacher to her political career—and she never stopped being a student throughout her influential life.

As we come to the conclusion of Black History Month, we ought to remember Shirley Chisholm as a leader who was just as invested in keeping Black History alive as she was in shaping it in her own right.