On Thursday April 25th, Dr. Zinga Fraser joined an assembly of experts in the field of Africana Studies to commemorate the 25th Anniversary of the Institute of African-American Studies (IRAAS) at Columbia University.

Dr. Fraser was as a major participant in the first day of the conference, serving as a co-organizer of the event as well as the moderator of its opening roundtable discussion, From Theory to Praxis, Black Studies Beyond the Academy. Additionally, she gave a presentation during the second session of the conference, Intellectual Legacies of IRAAS Scholarship. Prof, Fraser presented on the transformative political work of pioneering congresswomen Shirley Chisholm and Barbara Jordan. 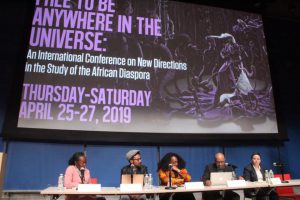 The conference, entitled Free To Be Anywhere In the Universe–An International Conference on New Directions in the Study of the African Diaspora was organized by Dr. Fraser and her colleagues to reflect on the history of (IRAAS) and envision the future of African Diasporan research and public engagement. The Institute was founded in 1993 by the late Dr. Manning Marable. Dr. Fraser, who studied with Professor Marable as one of his students, received her Master’s degree at IRAAS and currently serves as Co-Chair of its Alumni Council. 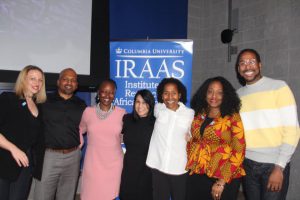 Along with her fellow alumni, Dr. Fraser gave a presentation at the second panel of the day. Her talk was entitled, “Black Congressional Women’s Freedom Dreams: Redefining American Democracy.” During the presentation, she discussed the profound impact of the first Black women elected to U.S. Congress, their “refusal to be invisible,” as well as their struggle to contend with “everyday attacks on their humanity.” 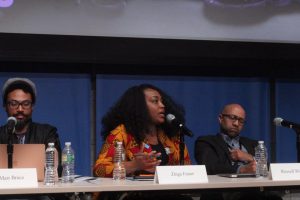 Jordan and Chisholm, she told the audience, “strategically used the House floor, podiums, committee rooms…and dining halls to confront its members on sexism, racism and misogyny.” Unlike their foremothers who had to fight for freedom from the margins and “behind the scenes,” Chisholm and Jordan, according to Fraser, too up the challenge of bringing the freedom struggle directly into the formal halls of political power. 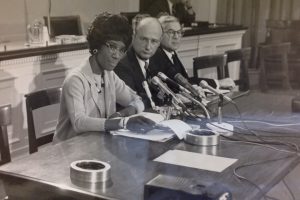 Shirley Chisholm became the first Black woman elected to Congress in 1968 after a distinguished career as a school teacher, daycare administrator and NY state legislature. She was also the first woman and African-American to launch a serious national campaign for the presidency in 1972. She was also a founding member of the Congressional Black Caucus and a lifelong champion for women, racial minorities, the working class, immigrants and children. For more information, please visit our page: WHO WAS SHIRLEY CHISHOLM? 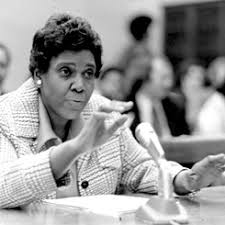 Barbara Jordan became the second African-American woman to ascend to the U.S. House of Representatives in 1972. She was also the first Black woman to serve in the House from the South. Before that, she had already made history as the first Black woman elected to Texas State since the Reconstruction Era. Among her many legislative accomplishments, Jordan served on the House Judiciary Committee, famously speaking before that body to articulate a moral argument in favor of the impeachment of Richard Nixon. In Congress, she fought discriminatory banking practices against the poor and racial minorities; she fought for immigration reform and for the renewal of voting rights protections. Aside for her speech before the Judiciary Committee, she is perhaps best known for giving the keynote address at the 1976 Democratic National Convention.

Being among the nation’s foremost experts in African-American history, politics and congressional Black women, Dr. Fraser has already written extensively on these two phenomenal figures including articles such as ‘‘The Political Genius of Black Women” and “The Politics of Trauma: Barbara Jordan and Shirley Chisholm’s Political Lives.” Furthermore, she is currently working on a highly-anticipated manuscript Sister Insider/ Sister Outsider: Shirley Chisholm and Barbara Jordan Black Women’s Politics in the Post-Civil Rights Era, which will go further into depth about Chisholm and Jordan’s role in forcing American democracy to change for the better. 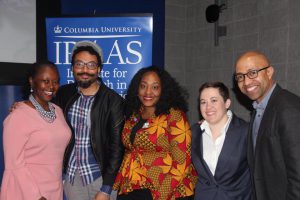 The participants of [from left]: Professors Griffin; Bruce; Fraser; Shibley and Rickford.

If you are interested in learning more about the work of IRAAS, the development of the new African-American and African Diaspora Studies Department at Columbia, or the work of Dr. Fraser, please visit the following websites: