The Chisholm Project mourns the loss of David N. Dinkins, who was elected as the New York City mayoralty in 1989. In that year, Dinkins became the first (and only) person of African descent to occupy the City’s highest office. Dinkins is most remembered for his pledge to be a unifying leader in a time of racial conflict. Prior to serving as the City’s 106th Mayor, Dinkins was a colleague of another history-maker Shirley Chisholm when they both served in the New York State Assembly. Following his service in the State Assembly, he went on to lead the NYC Board of Elections, serve as City Clerk and as the Manhattan Borough President before becoming Mayor. 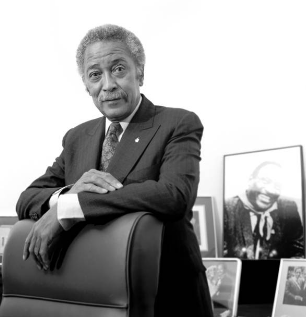 Like Chisholm, Dinkins emerged in the New York political world at a pivotal time in Black American history. Throughout the United States, Black leaders and organizers found themselves engaged in a struggle to end white political domination in urban areas with significant Black populations. In New York City, home to one of the largest Black populations of the global African Diaspora, this fight for political representation was especially important.

At the Shirley Chisholm Project, we are honored to have met Mayor Dinkins when we interviewed him for our Oral History Project. Today, we remember his life of public service, and the significant role he played in the development of Black political self-determination. We mourn his passing, celebrate his work, and extend our condolences to his loved ones.