Congressman Dellums was a founding member of the Congressional Black Caucus, a statesman, progressive champion, a friend of Shirley Chisholm and one of her staunchest political allies. Mr. Dellums also openly identified with the feminist cause at a time when the women’s rights movement was still looked on by many in the mainstream with contempt, hostility and suspicion in the United States.

In a 2016 interview with the Huffington Post, Dellums says this:

I recall entering Congress in 1971 and being called a “feminist” by members of my own party as if it was a dirty word.  They didn’t realize that I wore that label as a badge of honor.

Ronald Dellums was the only member from the Congressional Black Caucus who was willing to fully and openly endorse Shirley Chisholm’s presidential campaign.

Early in his career, Mr. Dellums was perhaps best-known as a vociferous critic of the Vietnam War and his calls to redirect exorbitant military spending towards social service programs. He was an outspoken proponent of Black civil rights, and he also championed the cause of divestment from the apartheid government in South Africa. His tireless advocacy of the Black Liberation struggle in South Africa eventually won the appreciation of Nelson Mandela himself.

As a friend to Shirley Chisholm, an ally to people’s struggles throughout the world, and a pioneering political figure in his own right, Mr. Ronald Dellums will be deeply missed. 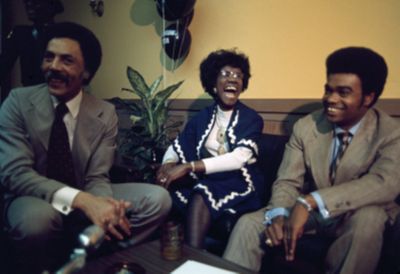 For a more in-depth account of Mr. Dellums’ life and career, we recommend reading the obituary recently published by the New York Times and this one by The San Francisco Chronicle.