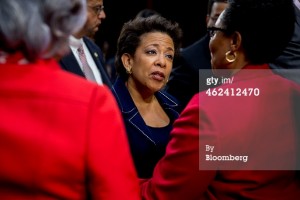 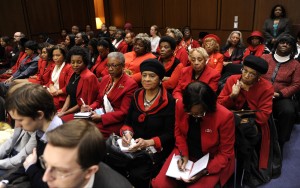 Lynch, who is set to face a tough hearing for the post, started a chapter of the sorority at Harvard with current Attorney General Eric Holder’s wife, Sharon Malone. Though the connection was seen as controversial to members of the right-wing media, her sorority sisters proudly donned the organization’s signature colors—crimson and cream—in the hearing room.

The sorority was founded in 1913 at Washington, D.C.’s Howard University on tenets of empowerment, justice, and community service. Several current and former members of Congress are members, including Reps. Joyce Beatty and Marcia Fudge of Ohio, Rep. Yvette Clark of New York, and former Congresswomen Barbara Jordan and Shirley Chisholm.