Forty years ago: Shirley Chisholm in the Florida Primary 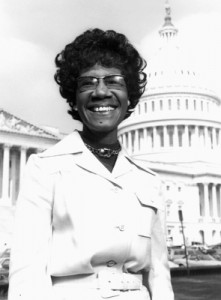 m made the January 25th announcement about her presidential run, she decided to enter the Florida Presidential primary. She had little money, budgeting less than $10,000 (unheard of today), and little organization. She relied on volunteer support from young people and the women’s movement. Her greatest opposition came from more established African American male elected officials.  On the campaign trail she walked on striking unionists picket lines, spoke her fluent Spanish in all the Spanish speaking districts, campaigned in colleges, churches and community centers. Unlike today’s candidates, she did not pander.

In 1972 the hot button issue was busing as a means to desegregate public schools. None of the other democratic candidates would openly support busing. Chisholm spoke forcefully, “Where were you?” she asked an all white audience, “when for years black children were being bused out of their neighborhoods and carried miles on old rattle trap buses to go down back roads to a dirty school with a tarpaper roof and old toilets? If you believed in neighborhood schools, where were you then?” The Daytona Beach News-Journal summed up, “her primary campaign really consists of nothing but belief in the people and just plain faith.” Chisholm won 3% of the vote. But her impact was more important than the vote count. Writing in The Good Fight:

As I stood on the steps and started to speak, I thought about the Civil War. Nearby, as everywhere in the South, there was a statue of a Confederate soldier. Moss hung from the branches. The day was hot. The rifle the statue was holding seemed almost to be pointing at me. A feeling came over me about the courthouse, a place of fear for blacks for a hundred years, where white justice had been dealt to them. “I never thought I would see a black person speaking from the courthouse steps,” one old black man told me later. When I talked about the need for coming together, the crowd responded with mixed emotions, some with laughter and some with tears. (The Good Fight, p 64)

For more information on Chisholm's political career, please visit her profile for Black Americans in Congress.

Image courtesy of Office of the Clerk, U.S. House of Representatives