A National Holiday is Established 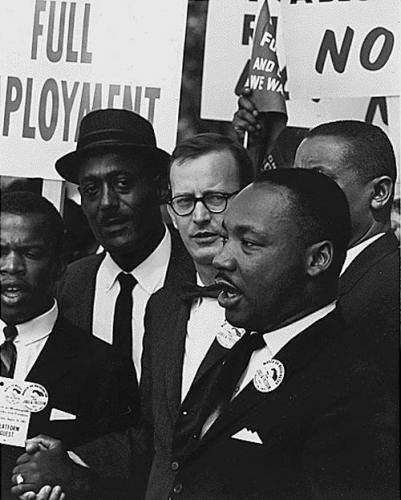 A National Holiday is Established for Martin Luther King Jr. with legislative help from Shirley Chisholm

From Prospect Heights Patch: It took 15 years for Dr. King's birthday to become a national holiday and it wasn't easy. There was fierce opposition from several sources, not the least of which was Senator Jesse Helms (Republican, North Carolina), he accused Martin of being a communist.

There were also those who said that others deserved to have their birthdays honored more, that taxes would be intolerable, that having to pay federal employees whether they worked or not was going to be bad for taxpayers. “Senator Bob Dole pointed out to those critics, 'I suggest they hurry back to their pocket calculators and estimate the cost of 300 years of slavery, followed by a century or more of economic, political and social exclusion and discrimination'.”

Their cause was aided by Representative Shirley Chisholm (Democrat, New York) who helped John Conyers submit new legislation each session of Congress. On November 2, 1983, President Ronald Reagan signed the law into being that made Martin Luther King, Jr's birthday a national holiday. On January 20, 1986, we celebrated for the first time a national day of reverence to Dr. Martin Luther King, Jr.